As a hardcore fan of the Bray Studios cartoons, their lengthy (yet mildly obscure) exposure on 1940s and 1950s television is of great interest to me. Film collector and animation enthusiasts who may be "purists" usually are very dismissive of television versions of theatrically released films. As I will stress again and again, television-era prints of such films are in many cases the only circulating (or even extant) sources for these masterpieces.
J.R. Bray's cartoon studio had a powerful yet seemingly short life...approximately 15 years (1913-1928). Regardless, Bray was unlike his peers in that he had confidence that there would be some sort of perpetual interest in the films produced at his studio. As a result, he would make dozens and dozens of films available to schools, libraries, and other interested parties in the 1920s first by offering (now obsolete) 28mm prints. Later he offered them in 16mm which became something of an educational and amateur standard by the 1930s. 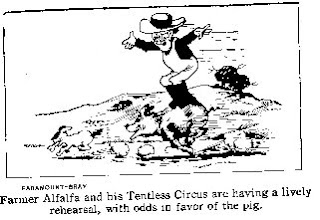 As television caught on in the late 1940s, Bray revitalized some of his cartoon stock and offered over 80 vintage titles in the form of newly titled 16mm prints, some with music and narration soundtracks. In the New York area particularly, baby boomers may recall seeing Farmer Alfalfa (Bray and or independent-Terry produced), Bobby Bumps, and possibly Out of the Inkwell on Fred Sayles' "Uncle Fred" kiddie TV show. According to one website, the station purchased and amassed a collection of 300 silent-era cartoon prints which would be used by Sayles to narrate in his show starting in 1948.
Although televised in limited amount when compared to Non-BRAY packages of Farmer Alfalfa (Gray), Out of the Inkwell, so on and so forth, it did mean that part of a new generation was given access to these cartoons.
You ask, what cartoons were these? Well, have a look! (Special thanks to Mark Kausler for sharing this with me a few years back.)

(Note: Both Dinky Doodle and Pete the Pup shorts were packaged as "Dinkey Doodle")

Amazing, eh? What is more interesting is that these cartoons were still available directly from Bray up until the early 70s. Unfortunately, by then some of the TV negatives had already decomposed and some titles were unavailable. Even so, with so many available rather recently, it is a shocker that most of those titles remain as good as lost...but if I have anything to do with it, let's hope that changes soon.
Here is an example of what the title art looked like:

(Special Thanks to Ray Pointer. To read about Ray's exposure to silent animation in his childhood, please read FINDING KO-KO.)
For anyone interested, so far I have four TV versions of these cartoons on my DVDs. BOBBY BUMPS' GOATMOBILE (1916) and BOBBY BUMPS' HYPNOTIC EYE (1919) are on my Bobby Bumps DVD while PERPETUAL MOTION (70s dupe) and CIRCUS (with original narration!) are on my Out of the Inkwell DVDs. Click the Tom's Vintage Film banner on top to find the DVD list.
-Tom
Posted by King of [Silent] Cartoons at 11:22 PM

Boy they sure had a lot of Dinky Doodle/Pete the Pup cartoons on television back then.

I wonder why there's no Col. Heezaliar or Goodrich Dirt in the package?

I've always wondered that...there are quite a few series omitted from the TV package. Maybe he thought they were too outdated?

wow, I'd kill to see more bray farmer alfalfa. Ive only seen the two off your tapes.

Also, would you happen to know anything about the TV scores to some silent cartoons, particularly the commonwealth aesops fables? Who composed them, when?

the soundtrack from "over the plate" is re used here:

Eek, I'm afraid that link doesn't work! All the music tracks used for Stuart/Guaranteed prints of Fables and OUT OF THE INKWELL are stock Winston Sharples tracks originally composed for the Van Beuren Rainbow Parade cartoons.
The Commonwealth prints used both classical and jazzy tracks- the latter of which are probably most well remembered and not as identifiable.

Does Mr. Pointer have a pager?

Does Mr. Pager have a pointer?

(Hope school's to your liking, Tom. Catch you later!)

i've recently converted 2 reels of silent film cartoons to dvd. the cartoons are "bobby bumps and his goatmobile" and another. the other has a character named the "pinkerton pup" in it.

i'm not sure where i got the film, either my dad or my step-dad. i'm interested in finding out if the actual film is worth something. i think it is 8mm. could it actually be from 1916 ?

thanks for any advice.

Hi Ann,
I'm sending you an email. You probably have a couple Keystone home movie prints sold in the 1940s.

Any chance you know if these films are still under copyright, and if so, who owns those rights? I'm working on an article that includes a Bray film produced for the US government in the 1920s and would like to use some stills.

I know this is an old post, but I thought I'd give it a shot.