Just what are Travelaffs? We’ll call them those primitive belly laughs we’ve seen world-round by naughty children, gossipy coworkers, nozy neighbors or an folly-seekers. This time, the folly is on film, as NYC celluloid’s dean of 16, Tom Stathes, unleashes an epic maelstrom of classic - and controversial - cinema. This August, escape your summer into a macabre paradise of bizarre cartoons – we’re talking Terrytoons, Van Bueren Studios, Mutt & Jeff, Warners gems and more. On a celluloid flying carpet, transport yourself to faraway lands with further-away mores: taking you to the jungle, the big city, on the farm or in the desert, Tom will be projecting a strong 80+ minute battery of hand-doodles to drool over, all on celluloid as they were meant to be seen. It’s strong stuff.

This will be Tom’s biggest screening ever, located in the spacious (and air-conditioned!) Attic Studios in Long Island City, Queens – just a few minutes from Manhattan. It also promises a long-lost Max Fleischer (Popeye Meets Sinbad The Sailor, Out Of The Inkwell) Talkartoon which hasn't been publicly screened in decades — come see the premiere of a newly found print. It's Bimbo the Dog, with lots of great Al Eugster animation and a crazy Southern-style soundtrack. Further-to-the-more, there will be a bouncing-ball singalong number, abundant popcorn and a heavy dose of 1920s and 30s style attire!

The Attic Studios are located at 11-05 44th Road in Long Island City, Queens. For quick subway access, take the 7 train to Court Square or the G/M/E to 21st/Ely. Subway map below. 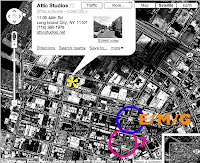