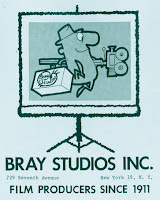 After years of researching and collecting materials, as well as recent months of toil, I am extremely proud to formally announce the launch of a new website that will be of great interest to film historians.

The Bray Animation Project, as I'm calling it, is a major research tool devoted to the 1913-1927 output of animated films from the Bray Studios. Combining imagery, videos, essays, and the most complete filmography published to date, the Project pays overdue homage to an early New York City film studio whose product has been painfully understudied.

Noted film and comics historians David Gerstein, Charlie Judkins, Mark Newgarden, Ray Pointer, Tom Stathes (yours truly) and Jack Theakston have provided informative texts for the site. The animated cartoon filmography can be viewed either chronologically or by series. It establishes whether each film is lost or survives (to our present knowledge), as well as noting whether an element has yet been collected for the Bray Animation Project proper.

There is also a discussion board included in the site. Film scholars, historians, fans and surfers are encouraged to post messages and connect with others through the site.

Without further ado, please visit the Bray Animation Project and pass along the word to your colleagues in the industry.