Reminder: It All Started Here! (in NY) Jan 17th

Just a friendly reminder to all you north-east American readers to try and make it to the White Plains "IT ALL STARTED HERE!" event which will take place on January 17th, this coming saturday. It is curated by animation veteran and historian Howard Beckerman as well as J.J. Sedelmaier of J.J. Sedelmaier Studios; not to be missed!
Here is some good information on the exhibit, and below some will be quoted if you cannot read the link.
http://www.nytimes.com/2009/01/11/nyregion/westchester/11artswe.html?pagewanted=1&_r=1&emc=eta1 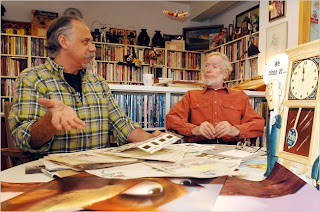 "Visitors to the Arts Exchange will be greeted by four-foot standees of Mighty Mouse and Popeye. Inside, a 15-by-20-foot reproduction of McCay’s Gertie the Dinosaur towers up to the mezzanine balcony, and polychromatic murals of familiar cartoon personalities adorn the walls. A Popeye lamp circa 1938 and a 1960s Mighty Mouse radio represent merchandising based on various characters. An oversized list displays the nearly 550 animation companies that have called New York home since 1906.

There is original artwork from each stage of the animation process, including character sketches, cels and storyboards from a selection of films. “We’ve got artwork of Betty Boop when she still had little dog ears, signed by the animator Grim Natwick, who helped create her,” said Mr. Sedelmaier. “We have a 60-year-old scene of Popeye from ‘Lumberjack and Jill’ that was never used, and a pose test, pencil test and final footage from a Baby Huey cartoon.”

DVDs playing on flat screens and conventional monitors throughout the exhibition focus on different periods of animation. One presents snippets of characters from old silent cartoons; a second shows more contemporary independent animation by New York-based filmmakers. Another plays a compilation of animated television commercials, including Marky Maypo shouting, “I want my Maypo!” and Bert and Harry Piel (voiced by the comic duo Bob and Ray) promoting Piels beer, both from the 1950s.

Equipment on view ranges from an antique Mutascope and a Moviola from the 1950s once owned by the animator Preston Blair to a desktop computer used in the making of Disney’s 1982 feature “Tron.” There are also manual sound effects makers, a Fleischer Studios animation disk from 1936, and a planning board (used to assist in the checking process before the animation artwork was filmed) designed by John Oxberry, of New Rochelle, for Jack Zander, the Pound Ridge resident who animated Jerry of “Tom and Jerry.”"

Here's the most updated info:

Man what a great exhibit. Howard & J.J. really outdone themselves.

It was a pleasure meeting you there, Tom.

Yep they sure did! Great meeting you too. We should hang out sometime in the city...pretty easy for me to get there!