My YouTube clip below has inspired this next post...
I think some of you may be familiar with the fact that there were series of Charlie Chaplin cartoons produced in the 1910s. Some were produced here, and some abroad (France, IIRC). It's interesting to note that Felix precursors appear on the Sullivan/Messmer main titles of the films; and quite possibly may have appeared in the cartoons themselves (your resident blogger has admittently not seen all entries in the series but will be familiarized with more very soon).
I suggest readers check out the Pre-Felix Pat Sullivan Studio Filmography compiled by David Gerstein with some small contributions from yours truly. Good work, Dave!
These two closeups from a small 16mm toy film loop most likely show a Movca-produced Chaplin cartoon from the mid-teens. 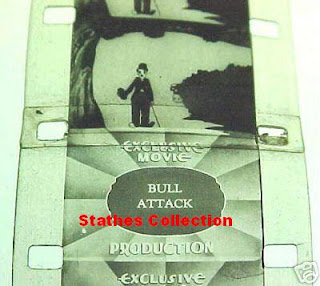 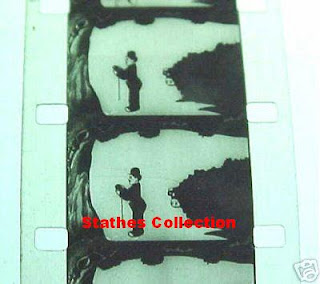 And below, a very rare promo ad for a 1918 short from the Sullivan Studios, as published in a Universal trade magazine from that period. 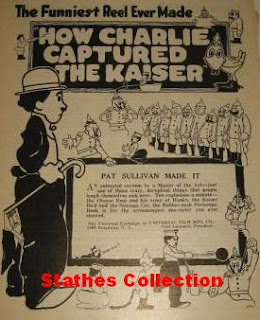 It's been speculated that the Charlies were done by Sullivan while Messmer was off fighting in the war. I'm pretty sure that our friend and Felix expert David Gerstein will be shedding some light on this period of Sullivan's studio in the near future. ;-)

Messmer seems to have returned *during* the production of the Charlie/Charley shorts. At least one later episode in the series appears to be full of his work, while earlier titles don't bear any Messmer hallmarks.
Thanks for the tip, Tom... now I've gotta finish that research paper! (struggle! wheeze!)