Courtesy Craig D., these are two examples of Home Film Libraries titlecards. While Felix Minds the Kid turns up alot in this version (later duped by Official Films before adding their own "Felix Minds the Baby" titlecard), the fact that HFL offered Winkler Krazy Kats remains a little known fact.
If I remember correctly, the complete version of this particular Krazy is available on Ray Pointer's Krazy Kat DVD. (As Craig mentions, his Krazy is a later Atlas Film dupe from the 60s.) 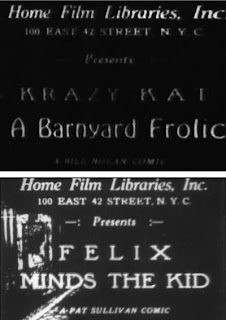