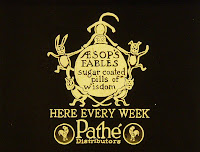 What does this all mean? Television prints are not impossible to find, making the Aesop's Fables not only the largest silent cartoon series but also one that has the best odds of being completely archived and accessible. The TV prints don't account for all the original nitrates held in archives, either. For as long as I'm breathing it will be a quest to find more of these titles.
And now, a sound version Commonwealth fable cartoon for you.
Posted by King of [Silent] Cartoons at 12:09 PM No comments:

Tom on the Fanboy blog, etc...

Check it out folks, my first Cartoon Carnival was written up by Joe Strike and appears over at the Fanboy blog.

Remember folks, join the Carnival group over on Facebook for updates on new screenings- at this rate, there definitely will be several in the near future!
Posted by King of [Silent] Cartoons at 1:04 PM No comments: 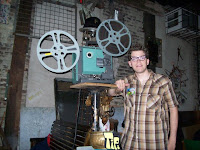 After all these years I've finally put on my first public 16mm screening of these ancient cartoons. The turnout wasn't as big as I'm hoping for in the future, but large enough to make a very nice start to the series, and I think the audience really enjoyed the varied presentation. 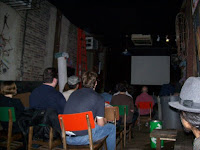 Photos by Joe Strike
And how would this blog post be complete without a video? ENJOY!

Join the Tom Stathes Cartoon Carnival group on Facebook and get alerts for any upcoming shows!
Posted by King of [Silent] Cartoons at 3:28 PM 2 comments: 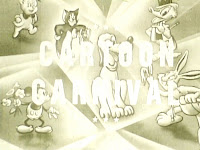 If you need help with more detailed or custom directions, email me at CartoonsOnFilm (at) gmail (dot) com 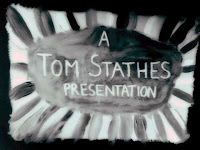