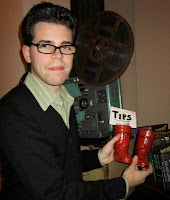 I'm proud to announce that fellow collector and cine-enthusiast Julian Antos has interviewed yours truly for the Northwest Chicago Film Society blog. Read the piece here, which was posted in conjunction with a marvelous Wladyslaw Starewicz program that the society recently presented. Several of the prints were on loan from the Tom Stathes collection. Thanks, Julian!


And for those of you in the NYC area, please consider attending The Tom Stathes Cartoon Carnival #11: It's Christmas Time!


As we move just a little further into the twenty-first century, one thing is obvious for historians of early film: we have fewer and fewer living links to the beginnings of the motion picture industry. This is particularly and strikingly true of the silent film era, which is of utmost importance and relevance to my interests and work in film research and preservation. After all, sound began taking a stronghold in film production some 85 years ago, and that’s often an entire lifetime for most people.

However, in 2012, we still have a very vivid and living link to a fabled film era.

One truly unique and gracious lady, Diana Serra Cary, is someone every person interested in film history should be familiar with. She’s not only one of the very last people still with us who has ties to the silent film era--no. In fact, she was an incredibly famous child star in her early years. You could say she was the Shirley Temple of the 1920s, and, known then as Baby Peggy, she was adored the world over and had quite a lucrative career. Which came to a screeching halt in 1924; and Peggy was considered washed-up well before the age of ten. Her story is a fascinating, if not sometimes painful one, though it’s something we can all learn from and most importantly, Diana survived a lifestyle that often kills other child celebrities at a young age. To say that we are blessed to have Diana with us in 2012 is a great understatement. Her autobiography, Whatever Happened to Baby Peggy? (BearManor Media, 2008), is a *highly recommended* read.

But, why discuss a child star on an early animation blog, you ask?

Diana happens to be a personal friend, and one I’m extremely grateful to have. Some six years ago or more, during my usual film collecting escapades, I happened upon a box lot of several 16mm films in very old canisters, admittedly, hoping there was some early animation in the lot. One reel in the bunch looked like an interesting odd reel from a silent feature film, but not being terribly familiar with features, it sat on the shelf for several months or a year practically unidentified. It was not until I looked over the canister once more that I noticed “Baby Peggy” written on it in dark letter, in a shade similar to the can’s tarnished surface.

At that point, I did a little research and talked to the fellows I know at the Silent Clowns Film Series here in New York City. The group, which is made up of three leading historians (Bruce Burbank Lawton, Jr., a leading historian/preservationist/projectionist; Steve Massa, a historian and excellent researcher; and Ben Model, a historian and internationally recognized silent film accompanist), decided that we should screen the odd reel as part of their Forgotten Clowns show at that time. It was determined that this was probably a very significant find: the final reel of a 1923 Universal Jewel feature, The Darling of New York.

My mother and I were both very intrigued by all this, and especially upon learning that ‘Baby Peggy’ was alive and well and residing in California. We made contact with her via telephone, and the rest is history. With the help of Steve Massa and fellow historian Robert Arkus, a tape transfer was made of the reel so a very excited Diana could watch this incredible find. As it turns out, practically no one had seen Darling since its original run in 1923, though certain very dangerous aspects of filming a fire scene never left Diana’s memory, and she wrote about it in great detail in her autobiography. Although the reel I found had significant damage, it included that fire scene, making the find for Diana all that much more rewarding.

For those interested in knowing, this reel exists because it was originally purchased as a Universal Show-at-Home print. Back in the 1920s and 30s, anyone who owned (or rented) a 16mm projector could contact the Universal studio and request that a 16mm reduction print be made on demand, for outright purchase, of most any film in their library. While many of the studio’s original nitrate negatives and other 35mm elements eventually perished over the years, these rare 16mm Show-at-Home prints often turn out to be unique copies of otherwise lost films.

Anyway, fast forward a couple years to 2009. Thanks to efforts spearheaded by historian and filmmaker David Stenn, who has been instrumental in helping locate lost Baby Peggy films, it was agreed that the UCLA Film and Television Archive would preserve this ‘lost’ reel from The Darling of New York. It was not only preserved, but it was blown up and reprinted in 35mm, its native production format. UCLA did as much restoration to the damaged image as possible, and the result was not only pleasing, but certainly of incredible significance to everyone involved. As a researcher, collector, and preservationist, I’m more than thrilled to have located a moving image that is of such significance to someone who was featured in it nearly ninety years ago. And I’m extremely grateful that as a result of this find, I have such a wonderful and gracious friend in Diana, who really is a wonderful person to speak with if you ever have the opportunity. Diana’s incredible memory, anecdotes, sense of humor, positive attitude and insight on life are unmatchable.

Today, Diana is thankfully being well-recognized for her amazing life story.

This past September, Diana made a very rare trip to New York City for a retrospective of some of her films at the Museum of Modern Art, which also featured an excellent new documentary about her life, Baby Peggy: The Elephant in the Room (2010), by Vera Iwerebor. This was the first time I had the opportunity of being with Diana in person, and at length too, and it was an experience I simply will never forget. In once-in-a-lifetime situations like these, I’m reminded of why I love the film work I do.

You can see Iwerebor’s film now, too--it’s being newly distributed on DVD by Milestone Films and, like her autobiography, I highly recommend obtaining or viewing this film. In fact, if you get Turner Classic Movies, you’ll also have a rare opportunity to see the film (as well as other rare, recently preserved Baby Peggy comedies) this coming Monday night on December 3rd.

All photos by Laz Stathes. Please contact Tom Stathes at cartoonsonfilm (at) gmail (dot) com for use elsewhere. Thank you.