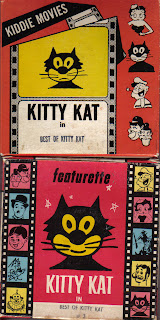 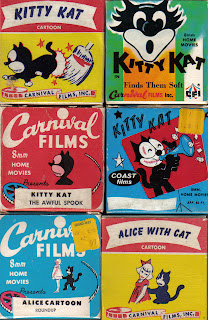 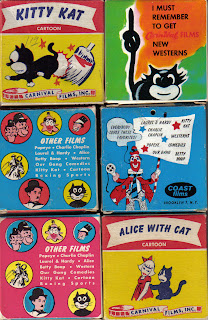 Hmm I actually like these. I mean some of the drawings of the cats are pretty bad. Like the one of the cats face where his mouth is a circle. But they have a charm that the shitty Kid Pics covers are lacking. They have a simple color palatte that I like. It reminds me of old four color comic books. Or maybe Big Little Books. I love Laurel and Hardy but I'm left wondering what they have to do with "Kitty Kat" So why are they on the box? Anyway, cool post Tom.

This is cool - thanks for the scans, Tom. Those box covers are awesome! I love these old cat cartoons.

Hi Tom,
How about providing an index to the "Kitty Kat" cartoons with the "Kitty Kat" title and the ORIGINAL title of the cartoon alongside it. That would be very useful to us collectors.

Thanks Mike, Marc and Mark :-)
I just might do that...I'll need to round up everything I have (which can be a daunting task with such a small space) and make a list.

Those scans are great! There are quite a few variants I hadn't seen before. KITTY KAT cartoons are perhaps the best value for your home movie dollar.

#1 They were MADE in the silent era, so there's no "missing soundtrack syndrome."

#2 The "KITTY KAT" umbrella covers so many different series! KRAZY KAT, FELIX, ALICE COMEDIES, whatever. If there was a cat in it it was fair game.