In my searches I have turned up pretty random things...and many times, these things were unexpected. For instance, last year I bought a "Kitty Kat" home movie print entitled THE FIGHTING FLEES. I was mildly familiar with this title as I once lost out on winning a print previously to a collector-peer of mine (confounded eBay!).

For those of you who are curious, this particular excerpt was taken from FELIX FULL O' FIGHT (1925).

What I did not expect was for the film to come in an "Eastin Feature Films" box. As it turns out, this box may very well be from the earliest days of the well-known Blackhawk film corporation when it first started operating in 1927.

I was almost certain that this specific line of Kitty Kat clips originated from Novelty Film Co., but maybe Eastin did have a hand in the Kat fiasco. Who knows? We need to turn up some catalog proof.

The reel itself was contained in a generic orange box which was within the Eastin box, so I cannot confirm its origin. The interior box is stamped DEC 24 1934 (in may not be visible in the scan) so this may very well have been a Christmas gift for some lucky kid that year. 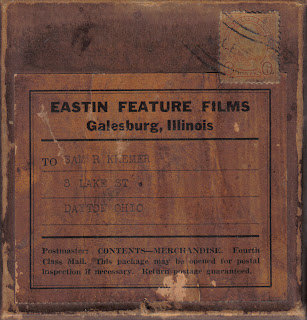 your a fuckin' genius with this shit