Thanks to a Kid Pics PD video from 1989, I was introduced to Home Film Libraries. If you must know, KP used an old amber-tinted HFL print of ALICE'S MYSTERIOUS MYSTERY (1926)in one of their Disney compilations. For reasons unrelated to this, Kid Pics (an Amvest Video company) was apparently sued by the motherlord: Disney. That may be why you don't see any Kid Pics videos appearing after 1989.
Anyway, Home Film Libraries was sort of a spinoff on Kodascope Libraries (the Blockbuster Video of the 1920s-1940s). Started in 1928 in a man's home, this company soon flourished and offered prints of many popular silent-era titles for outright sale. Later, HFL became Films Inc.
Unfortunately, through my years of collecting HFL seems to be one of the more elusive sources. As you can imagine, not much survives after some 70+ years.
What cartoons did they have, do you ask? Oh, plenty of goodies. Felix the Cat, Alice Comedies, some...random things and yes, Winkler Krazy Kats. (Thanks to the Man from E.G.G. for exposing me to that fact via a shortened Super 8/DVD print and later some actual listings in magazines that I came across.) 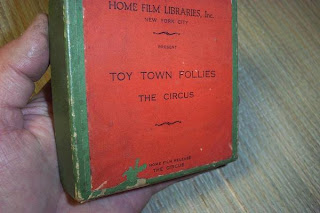 No folks, that's NOT my hand! 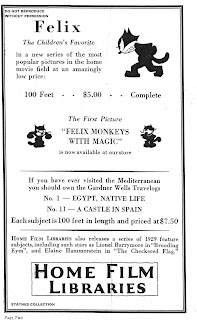 Whew! Ever spend money you didn't have? But better this than it vanishing into a black hole.
Posted by King of [Silent] Cartoons at 3:49 PM

Huh! I never gave that "Home Film Libraries" title card a second thought! That was an ATLAS "Kitty Kat" fifty-footer that was mixed in with all the usual ALICE and FELIX cartoons.

BTW, the iMac has been shipped. According to my mentor in this matter, a Mr. Stanchfield, I'll need to beef up the RAM once it arrives. More as this develops...

Well, I can safely say the winning bid was a little less than half the snipe amount :-D
Relatively speaking, it was worth it mostly because it's well, the only print out there.
Let me know about the iMac- I'm thinking of getting a MacBook. Time to get into the editing, restoration, and uploading field!