Colonel Heeza Liar was possibly the first true cartoon character to star in a long-term series of films. In his first regiment, the Colonel starred in 39 cartoons from 1913 to 1917. Surviving titles include In Africa (the first film), Shipwrecked (1914), At the Bat (1915- on DVD), and Hobo (1916).
Fast forward to 1922 and the Liar starts in another series of updated entries. This time, produced by Vernon Stallings and animated in part by Walter Lantz, Heeza Liar interacted with the live world much like Koko the Clown and Dinky Doodle. The most widely known example from this period is Col. Heeza Liar's Forbidden Fruit (1923) though at least 1 or 2 more from the 1922-1924 entries are known to survive.
Here below is a rare publicity ad from EXHIBITOR'S HERALD (1/6/23) 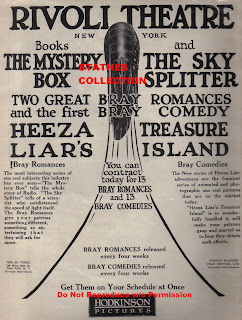 There were lots of cartoons about shipwrecks back in the old days. There was a Bosco cartoon called Bosco Shipwrecked! from 1931. And I can't remember how many times popeye messed up a boat. Anyway, I'd be interested to see a Colonel Heeza Liar cartoon. btw I added your blog link.

Thanks Mike!
I'd love to put together some Heeza Liars on DVD once I have the in-house transfer ability. For now though, there is only one on my Bray DVD.