In this #2 entry of Looks Like it's Lost, we bring you the synopsis of the second Bobby Bumps cartoon. Produced by Earl Hurd for Universal as a "Joker Split-Reel", this is the last cartoon in the series before Hurd went on to join forces with J.R. Bray and invent one of the most important animation innovations in the industry: the Cel Overlay technique.
Unfortunately, folks, "Looks like it's lost." 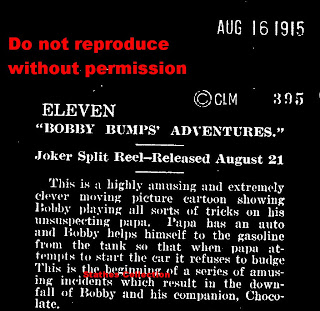 This is most likely a Moving Picture World review deposited at the Library of Congress as its copyright synopsis; where it has remained ever since.
Posted by King of [Silent] Cartoons at 7:28 PM

Don't worry, the comments will come. Maybe from people in the same building as you.

nice. I'd like to hear about laugh-o-grams if you have them. There were 6 of those cartoons right?