Krazy Kat being beaned with a brick by Ignatz Mouse is probably one of the most well-known images in comic history. The George Herriman comic creation first appeared in newspapers in 1913 and was soon adopted for the screen by William Randolph Hearst's International Film Service in 1916.
Simple in composition, the IFS cartoons literally did seem like moving comic strips. Some 10 of the 26 IFS Krazy cartoons survive.
After the 1917 shutdown of the IFS studio, Bray Studios began producing the series in 1920. The most popular title in this series has been THE GREAT CHEESE ROBBERY (1920), its first. An astounding 9 out of 12 Bray Krazy cartoons still exist in some form.
Fast-forward to 1925. Krazy had not been in any cartoons since 1921 and M.J. Winkler signed a contract to produce a new series of shorts after ceasing distribution of the Felix the Cat cartoons. A very succesful run, Krazy consistantly appeared in cartoons from this point in 1925; through the sound barrier, and well into the following decade.
Meanwhile, the negatives of the silent Winkler Krazy cartoons sat in storage. Not visioning a commercial future for these shorts in 1948 (just shy of widespread Television usage!) and not being able to afford the storage costs of the dangerous nitrate prints, Margaret Winkler ordered these negatives be destroyed. This one event immediately made the series very rare. A handful have turned up as shortened home movie prints, or in the case of four nitrate prints stored at the British Film Institute. Aside from these rare instances us enthusiasts are left to enjoy whatever scraps were used as "home movie" prints during the 1920s-1960s era of 8mm and 16mm projection in households.
Although I have a longer 8mm print of this particular clip, I was happy to find this 2 minute 16mm clip of a Winkler Krazy Kat in which Krazy is a dentist trying to pull a Hippo's tooth. Hope you enjoy some frames from this "Gem Safety Film" print retitled HIPPO AT THE DENTIST. (If you want to take a guess at what the original title might have been, drop me a line!) 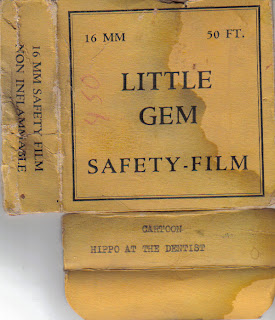 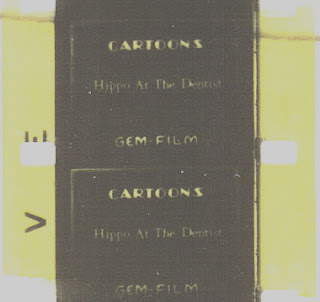 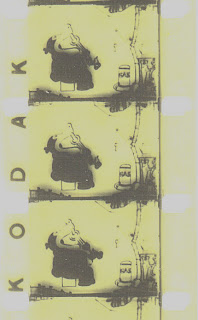 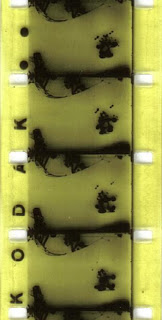 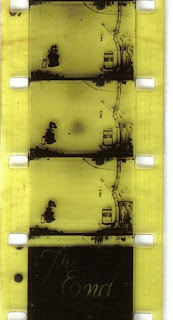 i'm going to say it was just called "the dentist". thats my guess

Well, my super 8 print was called "Dentist Love!" I'll try to put up a screen shot of the title card for you to nab.

Yep, that's the Atlas or Carnival print I have. Double the length. But sure, send along a screenshot- I don't have one uploaded.
Seems to me like it's hard identifying these Krazys because the original titles are not very "specific".

Any idea what the M. stood for in M.J. Winkler? There was a movie music compiler in the '20s by the name of Max Winkler. I wonder if it's the same guy.

It was Margaret J. Winkler, the prolific and very powerful female film distributor of the 1920s. Never heard of Max Winkler- maybe you should post something on your blog about him
;-)

"Dentist Love"? Sounds more like a certain W.C. Fields short that gave censors in various localities the screaming fits. Better not try posting any stills here of the scene that did it, though! ;)

A classic scene indeed, Burt :-D
Boy did I love Fields as a little kid...even though he didn't like kids!