Today I'm introducing a new series of blog posts. LLL, or Looks Like it's Lost.
In an LLL post, I'll examine print or visual records of a cartoon that is most likely lost; in other words, the only "hint" of a lost cartoon or series thereof.
***

Many of you know that Farmer Al graced TV screens for years throughout the 1950s. Most of what viewers saw were either the silent Aesop's Fables or sound Terrytoons via the Barker Bill show or the Farmer Alfalfa show.
The Bray Studios did have a TV package, folks (again, some of you know that.) Another elusive series within that package was the Bray-Era Farmer Alfalfa cartoons from 1916. While a handful survive, none to my knowlegde survive as Bray TV prints. 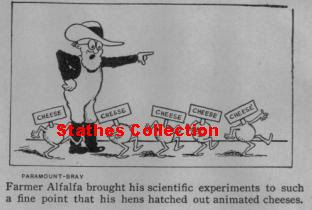 This image, among several others, appeared in a book called Film Flashes (Judge Company, 1916.)
Posted by King of [Silent] Cartoons at 11:21 AM

Your blog is very educational, Tom!

I always wondered how cheese was made.

And you'd think it would taste like chicken...go figure!